Koodo Community
Community
S
My new Note 2 will not turn on. Went to bed listening to music while it charged. When I picked it up screen was off. Blue led was flashing as if the sensor picked up motion still. But would not turn on. Hit power button. Nothing happened but a beep\feedback. Held button longer and nothing. Held it for s while after that, white line along left. Screen would not turn on. Blue led still flashes. Beeps. No visuals. The phone is new. Got it just over a month ago. Anyone have any idea how to fix this? Update: called phone. Screen doesn't turn on. No sound. But phone vibrates.
R

+4
You could try removing the battery for a few minutes to see if that will resolve the issue. A hard reset is another option. This method is used when a device becomes unresponsive. Hard resetting Note 2 instructions: 1. Press and hold the Home, Volume up and Power buttons simultaneously until the Samsung Note II logo appears, let go of the Power button, but continue holding the Home and Volume up buttons until the Android System Recovery (ASR) menu appears (menu appears in blue text). The ASR menu may take twenty to thirty seconds to appear. 2. Once at the ASR menu, scroll down to 'wipe data/factory reset' by pressing the Volume down button. 3. Press the Power button to confirm selection. 4. Scroll to 'Yes - delete all user data' by pressing the Volume down button 5. Press the Power button to confirm selection. 6. The Note II will now go through the data wipe process. 7. Press the Power button (reboot system now) 8. The phone will (or should) reboot to the initial setup screen If the above method fails to yield any results or you're not able to access the ASR menu, a hardware problem may be present and your Note 2 will have to be sent in for diagnosis/repair. Since the phone is relatively new, you're covered under the manufacturers' warranty, provided no physical damage (e.g. dropping the device, exposure to moisture or excessive heat or cold) caused the malfunction to your Note 2. Example of the Android System Recovery (ASR) menu: 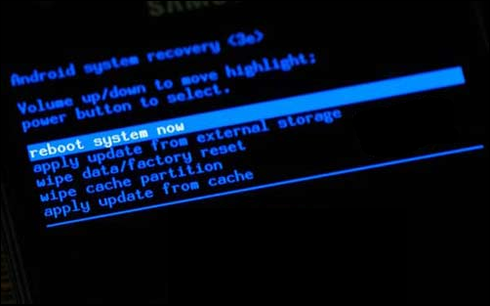 S
None of that worked and now the screen has a huge crack in it from putting the Samsung flip case back on. Looking at parts online the crack starts on the inside of the inside edge on the upper left and that is where the digitizer is? I am wondering if putting on the case caused damage or if the phone had some kind of defect that caused the screen to crack when I put the case back on after pulling the battery. I have a pit in my gut. I don't think koodo will fix or replace the phone and it is just over a month. I know I didn't do anything that would break the phone. I don't know if I should risk another gn2 or cancel the plan, pay the tab and look around for something more durable.
P
Userlevel 7

+4
In any case, I'd advise you to stay away from Samsung. I've yet to hold one of their phones and think "this is well put together". I'm not talking about anything other than build quality here.

Userlevel 2
Why does Koodo carry so many Samsung if what you say is true they should handle a different brand?
Jz
J
Userlevel 7
Samsung has become the Apple of Android; ie. people equate Android with their brand now due to their massive marketing and has created high demand/sales. Which is a shame, because I like most of the other major manufacturers before Samsung any day (LG, HTC, Sony, and Motorola). Even Huawei makes better phones than Samsung! I left Samsung phones after the S III and haven't really looked back.

Userlevel 2
Great hopefully Koodo will get more selection. I just got a note I I seems alright but I have never been a fan of Samsung either
Jz
R

+4
Wow! I'm very sorry to hear this Susy. Short of writing a letter to Samsung and explaining the situation, I think your next best option is to cut your losses and do as you've suggested and find a more durable/dependable phone. You could try sending the device in anyway to see if its deemed a manufacturers' defect, but I have a hunch they'll likely chalk it up to physical damage.
S
Update: I went to koodo mobile booth. Predictable reply, we cant do anything if the screen is cracked. Found out about a Samsung repair site in Kitchener that will replace the entire screen unitif cracked or broken under warranty with proof of purchase in 90 days. Store is CPR. Number is 519.804.2150 Made my day. Koodo owes the store a big thankyou. Was going to cancel my note 2 plan this morning.
R

+4
Now that your screen will be getting replaced, hopefully the repair site can figure out why your Note II would not turn on. I would certainly be interested in their findings and other Note II owners in the same predicament would find the information very useful. Please keep us posted.